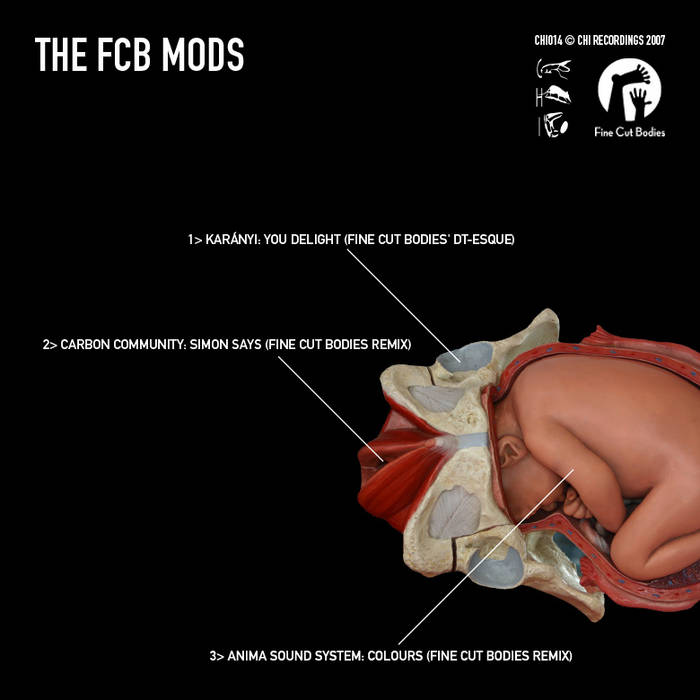 Next up on Chi is a hot remix package by Fine Cut Bodies, delivering three pieces of musical glitchyness. Support from the likes of Laurent Garnier, David Duriez, Audio Soul Project, Murray Richardson, Phil K, Palmskin, Peter Kruder, Joshua Collins, Elite Force, Crystal Method, Nils Noa, Precision Cuts and so on.... - Karanyi: You Delight (Fine Cut Bodies' DT-esque) Karanyi produced his first album at the age of 18, which put him right up in the scene in 2001. FCB creates a driving techHouse atmosphere, adding the vocals of the original but with a feel of a CD player that can't seem to play the disc without glitches. The breakdown sees a beautiful melodic by-pass, which is elegantly lead back to the pumping house. - Carbon Community: Simon Says (Fine Cut Bodies remix) The original song received a rather warm welcome shortly after its release; it also featured the James Zabiela mix `Utilities' on Renaissance in 2005. This time, the sounds have landed in the labs of FCB once more for another crazy piece of remix. A sick vocal loop sitting on a dynamic house base kicks things off, which provides the hook for the entire track. The breakdown delivers smooth and warm melodies to counterbalance the mint, chilly dryness of the tune. - Anima Sound System: Colours (Fine Cut Bodies remix) Not requiring too much of an introduction, the hungarian Anima Sound System have been constantly putting out records since as early as 1993 and this year has seen the release of their 7th album. FCB gives a mad dancehall twist to the original song, setting his remix in an environment of chopped up bits and pieces, but smartly balancing it out by keeping the vocals relatively dry and clean. Production is as ever.